If you decided to buy an SLR that means you want to learn how to take better pictures. That means also you gradually have to move from the more automated modes typical of point and shoot cameras to the advanced "Manual" modes.

But before you can properly use these manual modes, you need to understand the basics of photography 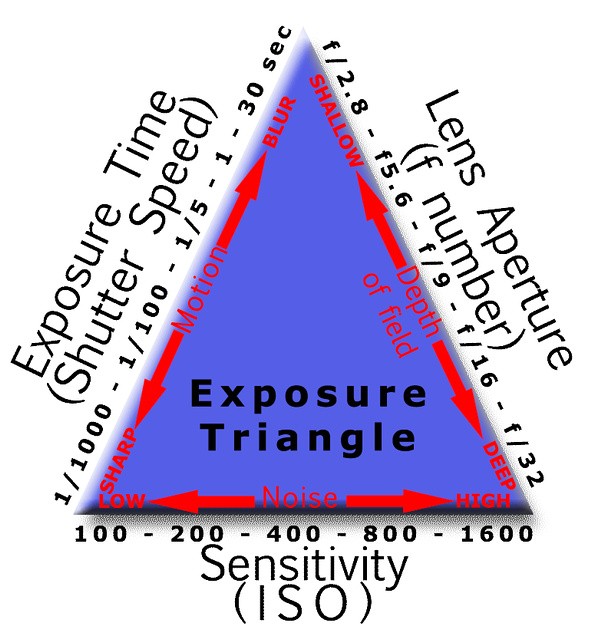 The measure of the camera's sensor sensitivity to light.

Previously it was the sensitivity of the film; in the digital era it's just a number we can easily change in order to compensate for low light situation (at the expense of an increase of the digital noise).

LOW: less digital noise, but less sensitivity to light (we will always try to keep it low).

HIGH: more digital noise, but more sensitivity to light (we will have to use high ISO if the light is not enough).

From the images above you can see that increasing the ISO has allowed us to use a much faster shutter speed. The drawback is appearance of digital noise in the image.

The amount of time (in seconds) that the shutter is open.

I allows us to freeze the moment of action or to blur the motion.

SLOW: to blur the motion (for example to soften the movement of waves or for fireworks).

FAST: to freeze the moment (for example in sport photography).

With a fast shutter speed is possible to freeze the action of the surfer and the wave. With a slow shutter speed we can give a nice effect to a waterfall.

The size of the aperture of the lens.

LOW: a small f number means a large aperture; the lens is wide open and lets in a lot of light; depth of field is low.

HIGH: a big f number means a small aperture; the lens is closed and doesn't let in much light; depth of field is high.

This is the tricky one, and probably the only one of the three that needs some more explanation. The aperture determines how much of the scene is in focus.

You can think at the f number as an imaginary glass panel in front of the camera: only the objects that are intersected by the panel will be in focus.

The bigger is the f number, the thicker is the panel, and the more of the scene is in focus.

The smaller is the f number, the thinner is the panel, and the less of the scene is in focus.

We usually want a high depth of field (small aperture, big f number) for landscape (we want everything in focus).

A low depth of field (big aperture, small f number) is useful to separate the subject from the background (portrait, sport, etc).

A big aperture (small f number) means only the flower is in focus. With a small aperture (big f number) everything is in focus, from the rock in the foreground to the skyline in the background.

With this knowledge we can combine the three elements (Sensitivity, Exposure Time and Aperture) to obtain the exposure we are after.

Go to the next Tutorial - Camera Basics #2